With a picture in my mind of mornings in a spacious workshop and afternoons on the beach, I had agreed to spend a week or two in West Wales this summer helping my colleague Peter fulfil his order of 40 chairs to go to a hospice in Denmark.  The best laid plans and all that…………

By the time we had reached early October, we agreed that I should do my bit in my workshop in Herefordshire, then just spend a couple of days delivering my produce and assembling a few chairs together in his workshop. I spent a week making and bending a load of crests, cross-rails, laths and back legs, then loaded them along with some more ash logs into my van and drove over to Pembrokeshire. I arrived to find Peter and Nikki working away in what he had referred to as a barn – not some romantic timber structure but it did have a roof, 4 walls and a pair of doors that opened wide. On my arrival we carried the fruits of my labours into his workshop for Peter’s inspection.

For somebody who had just spent 6 months assisting running courses, Peter had established an impressive chair-production workshop, with an eager team of co-workers, Nikki, Merlin and Alec, who all spent various lengths of time gaining invaluable experience in a production situation. Alec was now back home and Merlin was away for the week, leaving just Peter and Nikki, so the three of us spent the remainder of the day assembling back panels. Most impressive to me (and well-placed in the autumn sunshine) was the work-bench, made out of a fire door that he had bought for £5, with a leg in each corner and a little bracing – simple but effective. At one end hung his F-clamps, within easy reach when needed. (When I arrived home to my own workshop, I put this idea to use by adding a rack for clamps to help hold down my bench when steam-bending.) 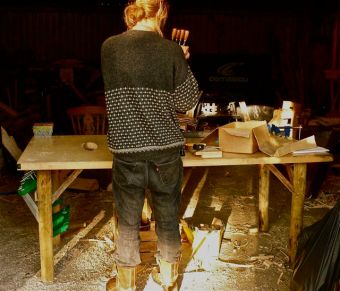 Peter enviously eyeing up the fancy chisels I brought with me.

Easily reached F-clamps holding down my own lightweight bench

I stupidly left my camera tripod in Peter’s workshop, so was unable to take a decent photo of the spectacular collection of 24 chairs, which Peter and his gang had already assembled. Some of them had already been seated, using knitted polypropylene cord, making for a very light, attractive, comfortable and long-lasting seat.

Seeing these chairs stacked and ready for shipment brought to mind Philip Clissett’s contract for 100 or so chairs for the Art Worker’s Guild in London in the late 19th Century. Could it be that Peter’s project is the largest single order for hand-made greenwood chairs in the last 120 years?

The following day we returned to the ‘barn’ where we squeezed together numbers 25,26 & 27, briefly assisted by Britte (sorry if I got the name wrong), the lady who had placed the order.

Peter and his team now have 3 weeks to complete the chairs before they set sail for Denmark, after which he & Louise with their Welsh-born baby daughter, Gwen re-locate to Sweden on the next phase of their remarkable lives. I look forward to seeing some pictures of this collection of chairs in the hospice ……………..and to following the progress of this inspiring young family.

One thought on “Some serious chair production”