In 2017 Tamsin‘s friend Jackie Morris visited us with her partner Robin and they thought it would be fun to bring along a couple of their friends on a 5-day course to each make a chair. Over the intervening year Jackie’s many years of hard work have been rewarded by the acclaim of her latest book, a collaboration with Robert Macfarlane entitled Lost Words.

Monday, the first day of their course arrived, as did Jackie & Robin with their friend Astrid, a skilled woodworker, who is always keen to try new aspects to her craft. The fourth member of the group was Nicola Davies another successful author and TV presenter, who unfortunately missed the first day due to sickness. This gave me the rare opportunity to work alongside Jackie, Robin and Astrid, starting to make some of the components, which Nicola supplemented with her own endeavours when she arrived on Tuesday.

After a short introduction to the techniques of working with green wood, the team were given some sections from an ash tree, sourced from a nearby woodland belonging to Herefordshire Wildlife Trust. 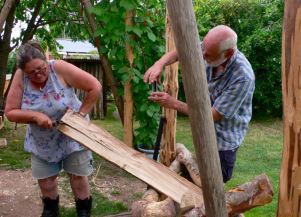 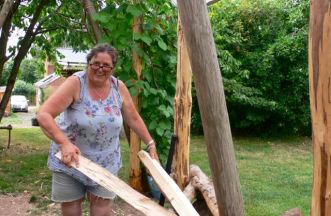 Jackie with her cleft ash, containing a pair of chair legs

Using a ‘wedge on a stick’ normally called a froe, they ‘cleft’ the log in half and then in half again until it yielded the wood for a pair of chair legs. Then, using a shaving horse and drawknife, they shaved the rough blanks to shape to be steam-bent to produce the familiar gentle curve of a comfortable country chair.

By Thursday, they had all assembled the back panels to their chairs and were ready for the final assembly. The first stage was to drill at an angle into their pair of back legs. While the driller(s) used a traditional brace-and-bit to drill, two others would sight up their alignment to ensure they were drilling at exactly the desired angle – ‘left a little, up a little – DRILL!’

Once the holes had been drilled, the chairs were assembled, panel by panel, until the final squeeze, using a powerful clamp.

The final job on Thursday afternoon was to oil the chair frames, so as to be dry again for  the seat to be woven the next day. While Robin was still furiously sanding his components, he was banished to the adjacent lawn (watched adoringly by our dear old dog), in order to prevent fine clouds of dust defiling the smooth, sticky surfaces of the womens’ frames.

On Friday morning, the team each chose their preferred seat pattern and by the end of the day we were able to admire the fruits of a fulfilling week. It was hard work for all five of us but every course is different and every chair is quite unique, encapsulating an experience that is all too rare in our modern, hi-tech computerised world.

As Nicola so sweetly summed it up: ‘I had the most wonderful week. It was totally absorbing – wonderful to be doing something in which every part of me was engaged. I adored the physicality of it.’