Oh dear ……I’ve seem to have spent the last 16 weeks thinking of nothing but the end of my time at Brookhouse Wood. Well, I suppose after 11 very happy and fulfilling summers, that’s only to be expected. The final run of courses in September were often hectic but I believe they were well appreciated – and they helped fill the coffers to get me through the coming winter. The final party was superb and I was delighted that so many of the ex-assists turned up to share it. The memorable Transhumance procession was recorded by my friend and colleague, Leo (I’ll try and add the link to his Vimeo) and the following night curled up in the hay around the fire, watching the lunar eclipse will never be forgotten.

Since then, I have spent 3 weeks tidying the workshop at Brookhouse Wood for Will & Bryony who have taken over the farm and for Will & Penny, who will be looking after the workshop and the new glamping enterprise. The idea is that a wider range of courses will take place at Brookhouse Wood, including not only Barn the Spoon and his organisation, The Greenwood Guild but also course like yoga and painting. The oak dining table will remain along with 11 greenwood chairs, some made by myself and many more made by past assistants who have been trained at the workshop over the last decade.

I removed most of the gubbins I had accumilated over the years, and had to squeeze it into my much smaller workshop at home. 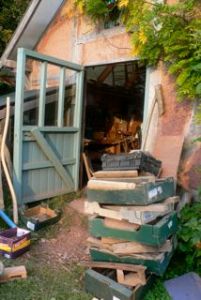 The last few days have been spent arranging it all to fill every space, while not disturbing too much, the family momentos at one end and the ‘boys stuff’ at the other end. 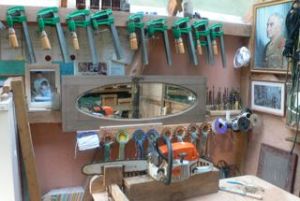 I then set about restoring my old plywood steam-box, which now sits in a handy space next to the woodshed, that had been occupied by the lawnmower. I found an old shelf for the electric boiler and fed the cable through the wattle-and-daub wall to connect permanently to the mains. If I do my steam-bending on a sunny day, the new solar panels on the workshop roof should easily generate the power required, saving the need to keep stoking the fire beneath a 40-gallon drum. 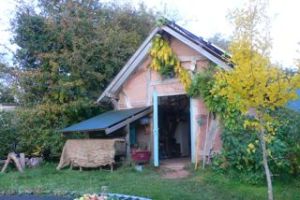 The forthcoming projects are to convert an old cupboard into an electrically powered kiln, and then to build a new tarpaulin covered area for running courses next summer. In the meantime this winter, I plan to write the 3rd book in the current trilogy entitled ‘Square Pegs in Round Holes’ describing the years at Brookhouse Wood, while also containing several chair-making updates on ‘Going with the Grain’.

Dry weather and the end of my final season of woodland courses had kept me well away from the office until yesterday, when I thought I’d catch up on my blog. I spent a frustrating morning trying to match the photos to the text with little success, so spent the afternoon picking autumn raspberries and cooking french apple tarts. This morning I woke refreshed and spent a jolly hour or so with my wife Tamsin, looking through Ben Law’s latest book ‘Woodland Craft’ and comparing it with a few others. So here are a few thoughts.

Ben Law has been writing books for about 15 years, mainly for Permanent Publications, who produce Permaculture Magazine. They have now linked up with GMC, who published my first book ‘Green Woodwork’ back in 1989. I wrote the book 4 years into my career running green wood courses and it was clearly a book about my attempts to rediscover many of the skills that had been lost over the course of the 20th Century and was never meant to be a professional manual. 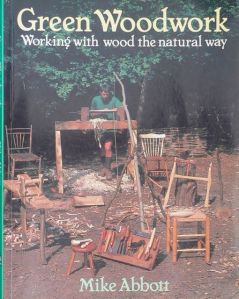 About 5 years after its publication, GMC asked if I would work on a much needed 2nd edition. By this time I had met Tamsin, an excellent illustrator and we decided that it would be fun to publish our own update, so I kept GMC dangling for several years until we produced ‘Living Wood’ ourselves. Every few years, GMC and I would tentatively discuss a 2nd edition for ‘Green Woodwork’ but we could never agree on the contract, so now they are linked with Perm Pubs, Ben Law was the obvious man to bring out a new book on greenwood/woodland crafts. (I’m not sure why his book has dropped the ‘s’ in Crafts).

I haven’t yet read it cover-to-cover but as always, Ben has written the book well on the range of topics (mainly associated with sweet chestnut) with which he is now very familiar. Other topics, such as hazel hurdles, laths, willow baskets and chair-making are well covered by specialists in these areas. This gives a far more professional approach to the topics than my ham-fisted first attempts in ‘Green Woodwork’. In this respect it almost harks back to the real classic book on the subject, Herbert Edlin’s ‘Woodland Crafts in Britain’, a book that must have taken years of research and will certainly never be equalled.

As well as the practical step-by-step instructions, Ben’s new book contains many good quality illustrations but where it is dreadfully let down is in the photographs. It appears that the publishers have paid for a pro photographer to spend a day taking a load of pretty atmospheric pics, which are given double page spreads, while poor old Ben has had to take most of the other photos himself and they have been squeezed so small that it is very difficult to gain anything useful from them at all. This prompted me to search out my copy of ‘Greenwood Crafts’ by Rebecca Oaks and Edward Mills, published by Crowood Press in 2012. Along with another of their books (‘Windsor Chairs’ by James Murcell) they have made a real effort to achieve a high quality in their photos.

Because Rebecca and Edward are based in the English Lake District, this book has quite a different emphasis on the crafts covered and I feel it is more suitable for anyone who is new to the world of greenwood/woodland crafts. It has a complete chapter on setting up a greenwood workshop as opposed to Ben’s book which, although it has lots of (tiny) photos of a range of tools, only has a double page spread of drawings of the devices that are so critical to the success of these crafts.

So my conclusion is that Green Woodwork is a nicely written reminder of the sorry state of green wood crafts in the 70’s and 80’s (and how good looking I once was!). If you want to read how to get started, then I would suggest, Mills and Oaks is the book to get you underway but for a well written guide for those who have already entered into the green wood world, then Ben Law’s book will inspire you to further achievements. However no book will ever compare to Edlin’s classic and no book will ever compare to learning these skills at first hand from a skilled teacher.

Three weeks ago I spent the day on ‘The Verandah’ at Brookhouse Wood with a bunch of people coming to the end of my final chair-making course carrying out the final assembly of their chair frames. We took the opportunity of a good weather forecast to move all the benches out into the warm September sunshine. 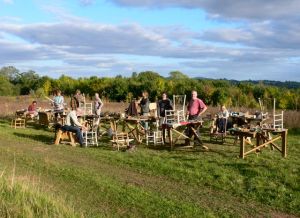 On the final day of the course we were able to spend another day in the sunshine weaving the seats. 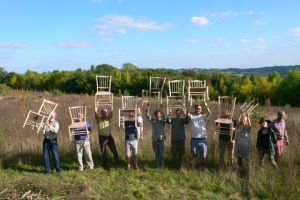 Bryce was one of the people who had made a low ‘sitting chair’ (as opposed to a dining chair) with a colourful polypropylene seat. Once all the chairs were finished we were able to prepare for the farewell party, for which we were joined by friends, previous course participants and a good number of ex-assistants.

I haven’t yet had time to post this myself, so here’s Nick Gibbs’ account of a memorable weekend.