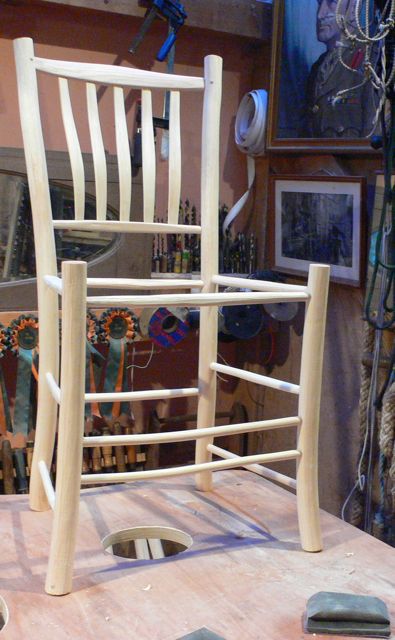 Saturday 12th was a day off but I was back in the workshop again today (Sun 14th) – the other side of the coin, when running your own business. The first thing was to drill all the mortices in one of the side panels. This was pretty much by the book ‘Going with the Grain’, lifting the back of the chair by 5cm, marking out where to drill, then gripping the frame to the bench. Having reflected on my comment about it being too scary to do all the drilling with a Forstner bit, I tried it on a scrap piece and it seemed OK, so I thought I’d try it for real today. It was no great ordeal – it burned the wood a little where the depth stop rubbed but that could easily be shaved off. I’ve laid out all the tools that were needed for this particular process. 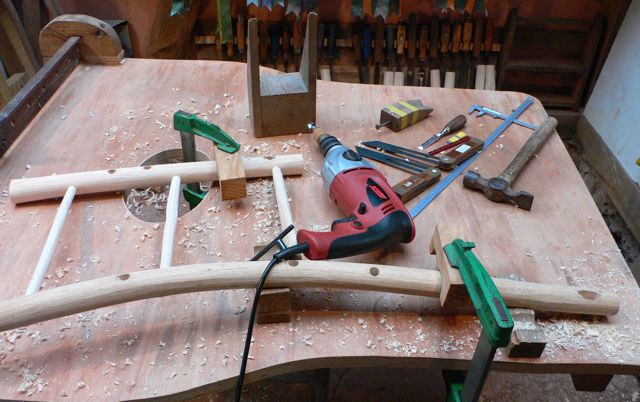 Here are the stages in creating the mortice for the crest at the top of the back leg. 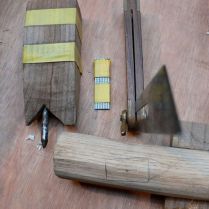 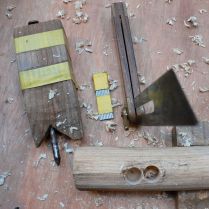 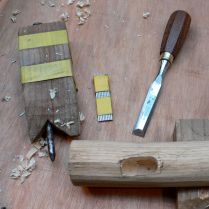 The lump of wood with a big nail in it is a ‘centre finder’, which when used with the sliding bevel (on the right) marks a point showing where to drill the angled holes. The little thing between them is the same 14mm bundle of nails that I used for marking the mortices for the laths  a few days ago. Tapping this little bundle on top of the nail hole shows where to drill the two holes of the mortice. I used the 12mm chisel to clean out the mortice after the 2 holes had been drilled. It looks a mess here but a few strokes with a spokeshave cleans it all up nicely. 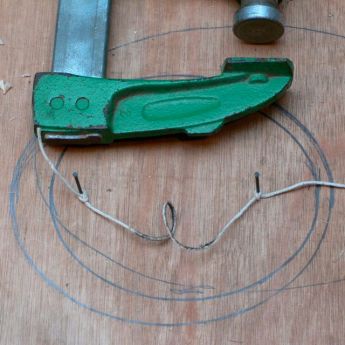 When drilling the second panel, I decided to make a new hole in the bench to enable a clamp to grip the front legs to the bench. I like making it an ellipse, which is very easy to do with a couple of nails and a short length of string. I could probably calculate exactly where to put the nails and how long the string should be but I went for trial and error. The first attempt was too small for the clamp but the second attempt was fine. I could have made it more elliptical by shortening the length of string. (See the new hole in the pics below)

I thought it worth using the dummy method described in my book ‘Living Wood’ to perform a trial assembly with dummies to take the place of the front and back rails and rungs – the same length but smaller tenons (so that they can be easily removed again). The frame is held together with bungee cord, so that I can measure the lengths for the cross rail and the crest. I had made the crests over-length (just in case) so I cut them shorter according to the lengths given in the book – which was reassuring. 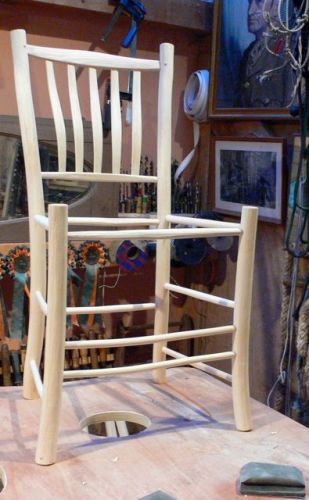 After spending some time shaving and sanding all the components, I then squeezed it all together and fitted a couple of 5.5mm square walnut pins into 6mm holes at the top to hold the crest in place. (The little grey pad, bottom right is one of the wonderful Abranet pads for sanding everything).

Not counting the two walnut pins, that’s 22 components and 36 holes to create a remarkably robust structure out of very little wood but a lot of time and effort.

I just need to trim the tops and bottoms of the legs before oiling the frame and weaving the seat but I’ll hope to assemble the other 5 chairs first.