A year or so ago, my wife & daughter introduced me to a new musician called Courtney Barnett, who had released a double EP with a great track called ‘Out of the Woodwork’. To coincide with her current world tour, Courtney released an album entitled ‘Sometimes I sit and think and sometimes I just sit’. Well, as a chair-maker, this was bound to catch my attention, especially with a picture of a chair on the front cover. By chance, on 6 Music one day, they mentioned that Courtney’s dad collects chairs. I got the idea that I should make a chair based on the album cover and present it to her to take home for her dad. 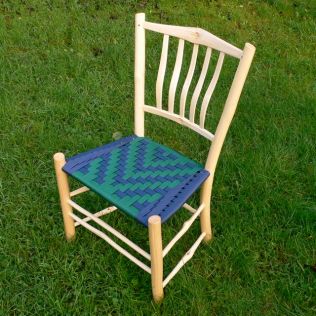 Well……I finally completed the chair yesterday and we are going to one of her gigs in Wolverhampton (still a few tickets going, I understand) but I doubt she’ll be able to take the chair with her, so it will go to Hannah, a friend who’s parents own the woods where I had a workshop many years ago.

The chair is an ‘elephants eye, settin chair’. The ‘elephant’s eye’ is a feature that can sometimes appear when splitting the wood from near the centre of a log, which once contained a little branch.

The ‘settin’ bit I once found in a wonderful American book all about the life and work of one particular chair-maker in the Cumberland Hills in Kentucky. This book contains an extract from another superb American book, which changed my life when I first read it. The settin chair is a kind of rocking chair without the rockers. 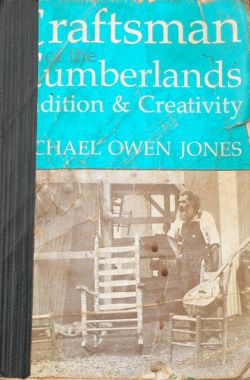 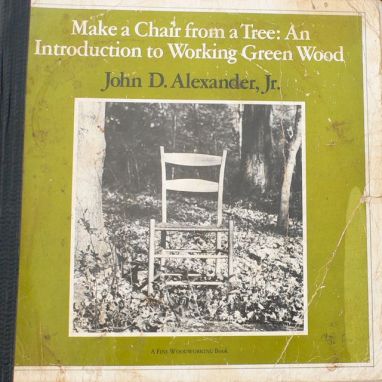 ‘The slightest effort is sufficient to tip the chair backward, permitting one to remain comfortably at this angle for long periods of time, to lean against the wall or to rock back and forth’

In Britain we have a nursing chair called a wee-wor, which seems to be peculiar to a Victorian chair-making family called Owen, in Clun, on the English/Welsh border. 20 years ago my wife and I bought one of these  chairs as a wedding present for each other, since when it has been used as a model project on my courses. The ‘wee-wor’ name was given to us by Chris (below left) who came on a course and told us that his mother’s family came from Clun and that’s just the name they had for chairs like this. 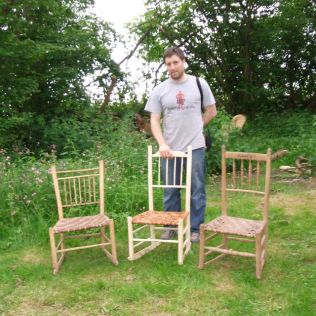 It has evolved through various stages until this summer Paul (above right) decided not to bother about the rockers and low and behold……..we had a settin chair. I have never liked rocking chairs but I love the settin chair, so we have had a few more made since then on courses and now I have made a few of them myself.