As I understand it, Halloween marks the pagan new year – the harvest is in and nature starts its well earned rest until the spring, making a good marker for the start of my winter routine.  By now I hope to have all the apples picked, the firewood stacked, a bag of spuds in the larder and a full gas bottle outside the kitchen – ready for whatever the winter can throw at us. With half -term over we can snuggle into our normal winter routine – Tamsin working away in her studio producing stained glass panels for the forthcoming Hereford Contemporary Craft Fair, while I spend the mornings working on the revised book, and the afternoons cutting firewood, picking our prolific autumn raspberries, cooking apple crumbles, shopping and relishing many more family activities (such as driving our teenage children the length and breadth of East Herefordshire).

As last winter was drawing to a close, I received a phone call from a TV researcher asking if I would be interested in taking part in a TV programme, Tales from the Wild Wood. As part of a woodland restoration project, they were going to fell an ash tree, which they wanted to convert into furniture. Of course I told them I was the man for the job and I could bring a shaving horse with a few simple tools and convert it on the spot to make the parts for a chair. I posted them a copy of my chair-making book, Going with the Grain and looked forward to taking part in the project. A few days later we spoke again and they had already decided that the tree would be planked in a sawmill, and they wouldn’t require my input. Ce est la vie!

I must somehow have been tuned into the current zeitgeist and spent a fair chunk of the summer, (when not running courses) in building a shed in the garden centred around two splendid ash crucks and a load of milled Western red cedar. Last week, we spent a day fixing all the cladding, so as a farewell to the summer, I spent Halloween morning preparing kindling wood out of the last remains of the cedar planks. A potential candidate for ‘George Clarke’s Amazing Spaces’ had we known, the cruck room has already been used as accommodation for at least six friends and family over the last few months as well as being a superb location for my after-lunch 20-minute nap (uninterrupted by phone calls from India asking to speak to Mr aBott). 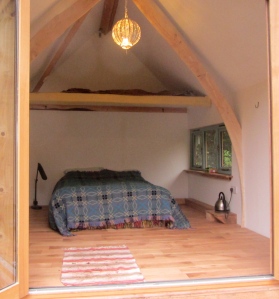 Instead of indulging in trick or treat, I spent Halloween evening ferrying Dougal back from his break-dance class, an hour or so before collecting Nettie from helping out with the Class 7 Halloween disco. I rushed back in time to catch 20 minutes of ‘Tales from the Wild Wood’ (8.30 on BBC4) but had missed the felling of the ash tree. However I was in time to see three respected woodworkers selecting their required logs, which were by now lying on the woodland floor. When I saw furniture-maker David Colwell describing the ideal log for his elegant and efficient steam-bent chairs, I didn’t feel so bad that I had missed out on the chance of another ’10 minutes of fame’. (It is exactly three years since I took part in the filming of Monty Don’s Mastercrafts, which brought in a great deal of custom for my courses). I was also astonished by John with his large-scale turnery, who says he has to buy most of his ash from abroad. I shared in Ralph’s disbelief at Rob Penn’s ignorance of the value of a chunk of burr, which could have been made into some beautiful bowls instead of being chopped for firewood. Still, life is all about learning, and Rob is taking it all on board and sharing it readily with anyone who may be watching the programme. It does however seem a shame that, as with Kevin McCloud’s shed building, the opportunity had been missed to show some really informative AND visually entertaining green wood skills. Never mind – it will happen another time.

Anyway, a few days ago we hooked up to Airband high speed wireless broadband, which has been received with great delight by Tamsin and Dougal, both astonished by the up-and download speeds. Today I hope to use i-player to see Rob felling his ash tree, wondering if in ten years time this will prove to be a valuable piece of archive footage of the days when ash trees abounded freely in British woodlands before the devastation of Chalara dieback. Or will this latest plague turn out to be yet another media frenzy, this time probably whipped up  by the apparent destruction of 90% of Denmark’s ash trees by the disease. Only time will tell. From a purely selfish point of view, if this were to happen in Britain, there should still be enough good ash to enable 400 more chairs to be made over my 5 remaining years of chair-making courses. As somebody pointed out, this scare might have the positive effect of increasing the public’s awareness of this wonderful resource which is so much taken for granted by modern society. Always look on the bight side, eh!